The production of recombinant therapeutic proteins is one of the rapidly growing areas of molecular medicine and currently plays an important role in the treatment of various diseases. Yeasts are unicellular eukaryotic microbial host cells that offer unique advantages in the production of biopharmaceutical proteins. Yeasts are capable of robust growth on simple media, readily adapt to genetic modifications, and incorporate post-translational modifications typical of eukaryotes.

In nature, polyketides are formed enzymatically by consecutive Claisen condensation reactions of short-chain acyl derivatives. At the biochemical level, polyketide assembly is very reminiscent of fatty acid biosynthesis, although it involves a greater variety of initiator and extender units. Furthermore, it shows greater flexibility in the reductive processing of these building blocks. Due to these peculiarities, polyketides exhibit enormous structural diversity, ranging from polyenes, polyethers and enediynes to macrolides, phenolic and polycyclic aromatic compounds.

The enzymes, which are responsible for the biosynthesis of these molecules, are called polyketide synthases (PKS). According to their architecture, they can be divided into three classes. Type I PKS are large, modularly organized proteins of microbial origin. They have multiple catalytic domains with specific functions. While most type I bacterial PKSs follow a logic of sequential assembly, their fungal counterparts tend to operate repetitively. The latter is also true for type II PKSs, which form monofunctional protein complexes. Until now, type II PKSs have only been found in a few prokaryotic groups, for example, in actinomycetes bacteria. 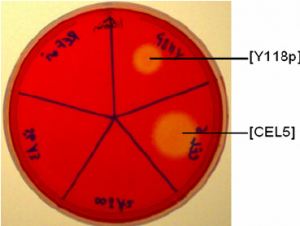 In contrast, type III PKSs represent the most widely distributed class of all PKSs with known members from bacteria, fungi, (micro)algae, and plants. Structurally, they are much smaller and less complex than the other two PKS classes. They consist of a homodimeric ketosynthase, which governs the entire assembly process, from substrate discrimination to chain elongation and product release. In the following, we will focus exclusively on the assembly mechanisms of type I PKS. Readers who wish to learn more about type II and type III PKS are referred to the reviews by Wang et al. and Shimizu et al.

Evaluation of target genes in protein secretion and retention.

Based on a list of mutated genes obtained from our previous study (18), genes involved in secretory and trafficking pathways (such as ECM3, EMC1, ERV29, GOS1, VPS5, TDA3, COG5, and CNS2), genes with similar functions appearing in Different strains (HDA2 and HDA3) and genes with a missense mutation of enriched GO terms (such as TAN1 from tRNA processing, PGM2 from carbohydrate metabolic process and PXA1 from lipid transport) were selected for evaluating its association with protein secretion and retention using single gene deletions.

To allow an initial selection of these different targets, we used the BY4742 strain background for which a unique gene deletion library is available, but consistent with our previous study, we used amylase as the model protein. Amylase production varied in BY4742 strains with a single gene deletion; some had increased amylase secretion and some had reduced amylase secretion compared with the reference strain. In addition to changes in amylase yield, the intracellular amylase ratio was also found to be altered by gene deletion.